I keep thinking “I can’t believe it’s October!” but actually we are in the middle of November.  This year is flying!

This week makes another wrap-up that is pretty light on content/photos.  We are in the middle of yet another big life change and I’ve been all over the place.  All over the place, figuratively speaking.  Literally I’ve been in the apartment.  On the couch.  Eating.  Have I mentioned that none of my pants fit?

Here’s some of what I’ve been eating (and eating, and eating)… 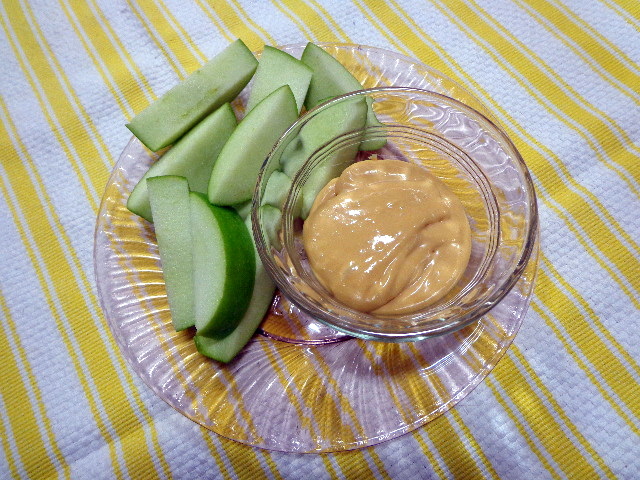 I even gave it its own recipe page.

And since there was clearly more dip than apple, I also dunked in some TJ everything crackers.

So good.  There was a lot of this snack this week.  Another day I topped the caramel with a dollop of my cinnamon maple pecan butter.

Spoonful by spoonful, the pecan butter container is getting pretty empty!

I loved this chocolate raspberry breakfast.

And cold (we were out of ice) coffee with skim milk on the side. 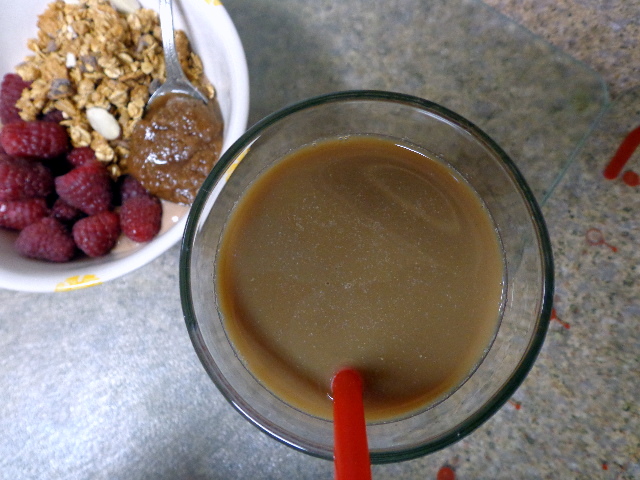 I planned on using SCM in my coffee but it exploded everywhere when I heated it in the microwave.  Just as well because the chocolate yogurt was pretty sweet.  I was impressed with the yogurt, I’ll have to check out some other varieties of their European style.

I’m going through some of my old recipes to reshoot the photos, and this week I made my pesto pasta casserole. 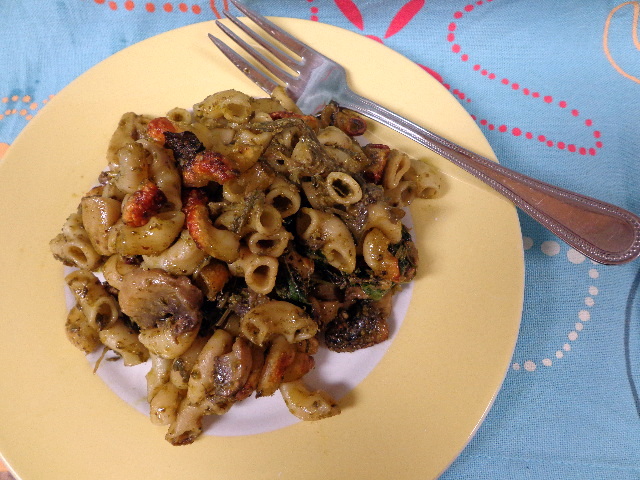 That picture’s not too great though, is it?  And I used a bottle of pesto from Trader Joe’s that we both hated and it basically ruined the dish.  Boo.  But on the positive side, I think this was the very first TJ product that we didn’t love. 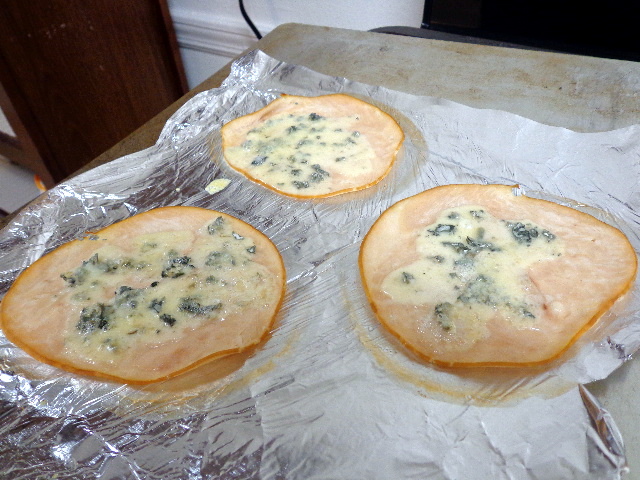 Classed up with crumbled blue cheese and a drizzle of honey when they came out of the oven.

The GBH is a 100% American-made product with a signature patented blend composed of extra-white clover, sage buckwheat, and orange blossom.

My blue cheese and honey crisps were definitely a better dish than the original.  The honey earned two thumbs up from me; the flavor was unique, but not savory the way I find some orange blossom honeys to be.

Our fridge is very bare, and I finally ate the frozen meal I bought the day we moved in, a Kashi Mayan Harvest Bake.  Plantains, roasted sweet potato, black beans and kale with a spicy ancho sauce served over 7 Whole Grains & Sesame Pilaf, amaranth and polenta topped with a pumpkin seed garnish. 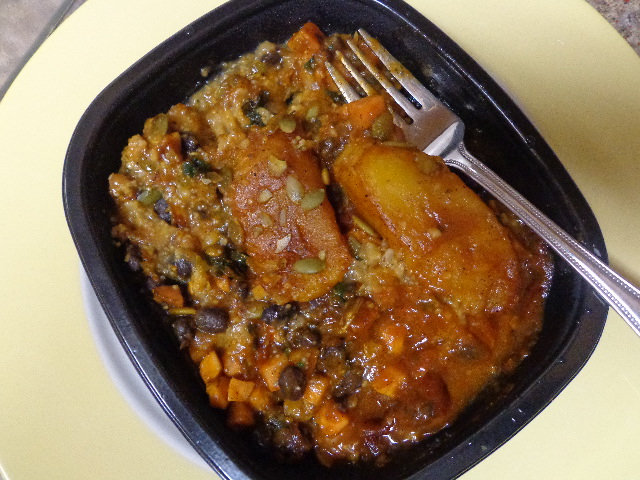 This is on my top-5 list for frozen entrees, both flavor and texture are great.  Not quite large enough for dinner for me though.  I planned on eating it with this truebar, 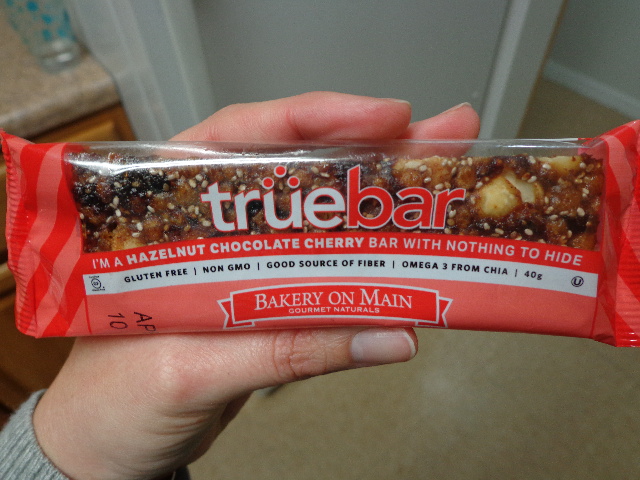 but it was disgusting so instead I ate a slice of seedy bread with Smart Balance Light and smoked gouda. 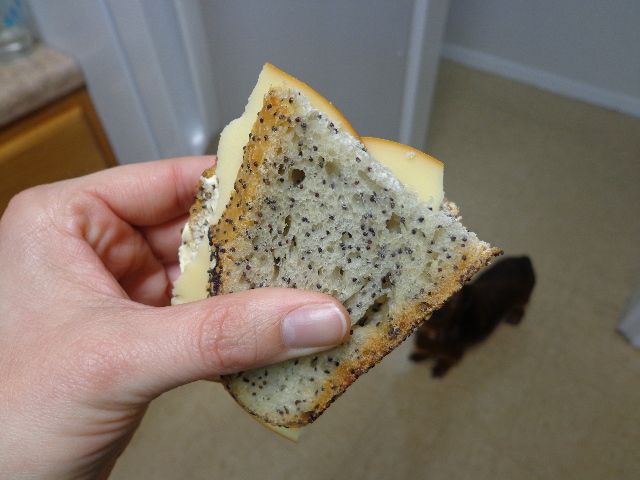 Much better!  Though I was still feeling snacky after dinner and ended up eating a bag of Smart Fries as well.

One night we got take-out from Jessie’s.

My fries with blue cheese for dipping were the best part, but my sandwich was pretty good too.

They have a fun group of Turkey Day inspired specials right now!  My sandwich was turkey with stuffing and cranberry dressing on top.  I want to go get the salad special soon, it has cornbread stuffing croutons.

The best sandwich of the week was one I made myself. 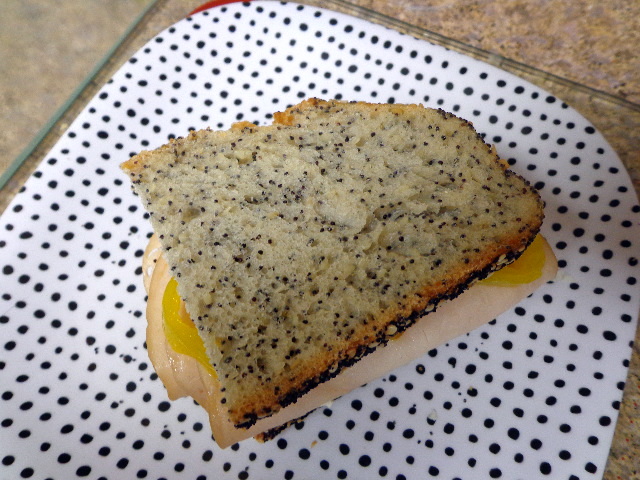 A slice of TJ seedy bread (one cut in half since this bread is much larger than the kinds I usually eat) with Applegate Farms smoked turkey, cream cheese, blue cheese, grape Crofter’s, and banana peppers.

So many good flavors.  Having banana peppers in the house for sandwiches has been fun.

Number 1 food of the week? 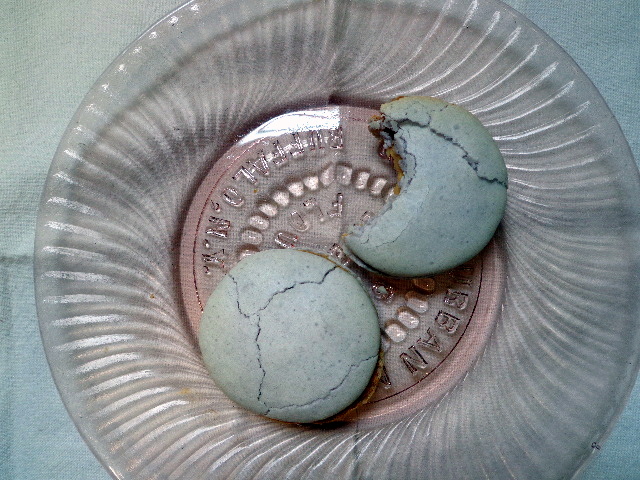 I hope everyone has a great weekend!

3 thoughts on “Weekly Wrap-Up; How Is It Mid-November?!”