The upcoming week is going to be busy, busy, busy and apparently today was the start of the craziness.  It’s not a good feeling to leave the house at 8:10 on a Saturday and already be running behind!

While running errands I did stop in at Dunkin Donuts to use a coupon I had for iced coffee.

With skim milk and toasted almond syrup.  The barista (are they still called baristas if it’s Dunkin?) gave me a giant sheet of new, exciting coupons so I’ll probably be back in the near future.

After running errands I ran to work (literally) in the pouring rain.  I packed a Oikos Low-fat Pineappe Greek Yogurt for breakfast. 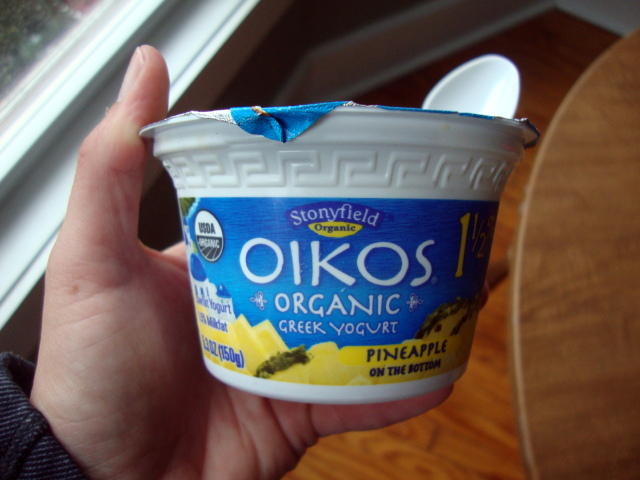 Holy crap, it was good!  I couldn’t stop mmmmmning.  It was so thick, creamy, and sweet that it almost reminded me of a piña colada.

Adam ate my last serving of eggplant (jerk!) so I got co-op hot bar for lunch.

1 falafel, sesame cashew noodle salad with tons of veggies, 2 grape leaves, and some chicken salad.  The veggies in the noodles and the almonds in the chicken were my favorite bites.

When I got home from work, Adam and two of our friends were on the couch watching a movie.  Patrick and Michelle brought pizza!

I had a veggie slice,

plus a simple salad of romaine, flax, and lite honey mustard dressing.

Buffalo people – the pizza was from Mister Pizza and it was great.  The crust was somehow both thick and crispy and it was loaded with vegetables.

Our friends were over because we had purchased a Groupon together… 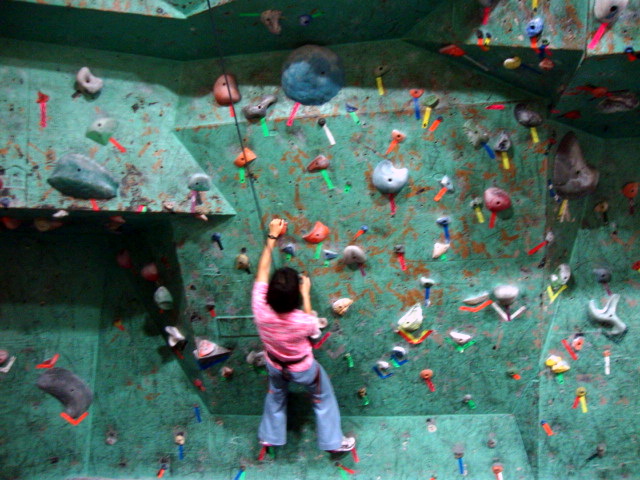 for rock climbing!  We climbed for two hours and it was exhausting and so much fun.

This year has been a total bust in the workout department but I actually felt like I did a little better this time than I did the last time I tried.  I mastered one fairly hard wall (ie not a kid’s wall!) and I was so proud of myself when I made it to the top.  At one point my arms and legs were so wide I was practically into a split.  <– bad ass

I’m going to make myself do a 4-minute workout and then I’m going to go pass out.  Good night!

One thought on “Rocking Around The Clock”